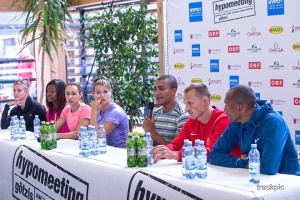 Brianne are you nervous now that your husband is here with you?

Brianne: No it’s rather comforting that he is here, I am pleased when I see Ashton nod to me, it’s reassuring to see him laugh now and then.

Ashton what’s your first impression of this Austrian venue?

Ashton: I like it very much here, my wife was here before and she told me already about it.

Everyone that knows you says that you are a humble person although being a world record holder. What makes you humble?

(Not feeling at ease with this question :) Well in fact I think I’m not the best!

Ashton: I think that everyone who’s exercising and works hard, lives for his goals while sometimes having a hard time but keeps on fighting is a real great athlete.

Do the two of you have a name?

Michael: Sorry Ashton, but a real idol to me has always been my former coach Torsten Voss who was a decathlete himself (8680/1987).

Damian: I think, like Ashton said already that there are so many good athletes. There are maybe a million people doing sports but when you make it to the track, standing at the start of one of this eight lanes you are a great athlete.

Did a year of 400 hurdles influence your decathlon?

Ashton: In a way all events are the same. You have to work hard for it. To me it was also fun, as the decathlon is also really fun to me.

Ashton what do you like more, the heptathlon or the decathlon?

Ashton: (… He is a little bit in pain with that question and is thinking what to answer , but then …) You know I like them both. To me it’s like having two children. You don’t make a choice to say you love one more than the other.

Ashton: I don’t know but I like to try new things!