Training your decathletes in the pole vault (0)

Here are some helpful guidelines for you to consider when you start training your decathletes in the pole vault.

Pole vault falls into the group of events with most effect on commonalities to other events.The biomotor abilities that a decathlete must have need to be emphasized through Pole vault-hurdles-Javelin. So as you understand, Pole vault contributes (point wise) to the second day like hurdles. It is important for the coach to train the most valuable in points events and then use the commonalities that those 3 events have to benefit the decathletes without wasting much needed energy. Understanding of the energy systems can help you fit the pole vault in your training (metabolic-neuromuscular planning)

1. Usable speed at plant and takeoff

2. Height of the center of mass, of handhold and pole angle relative to vertical

The run must be a controlled acceleration progression. The vaulter must maintain an upright body position. The stride is characterized by momentum in the beginning of the run and then turnover at the end of the approach. Allow the pole to become part of the body.

The runway must be predetermined. It is expressed by a starting check mark from six to ten count steps away from the takeoff mark. There must a coach's mark four to six steps out from takeoff. This mark is the exact distance needed to sprint normally from that point to takeoff. If the athlete is either in front of or behind the established mark, adjustments will have to be made. Neither of these adjustments will be good. It should be noted that the better vaulters take a longer penultimate step than the last step. That means that frequency must increase to keep speed from slowing.

The grip area of a pole is between 6 and 18 inches from the top for the pole to bend and respond properly. Actually, the only time a vaulter should hold lower is during drill work or other learning activities. The pole carry is determined simply for efficiency of running, planting and hanging. The plant should be as high as possible and the body as rigid as possible. This allows the energy to be transferred into the pole and keeps the body high for a high plant. The top hand is directly above the takeoff foot at takeoff. The pole plant begins two steps out from the takeoff. It begins when the third foot out from the last is on the ground.

The angle of the pole must be as high as possible:

a. It causes greater pole speed.

b. It is easier to bend the pole.

c. It makes it easier to penetrate.

d. It creates less distance for the pole to travel to vertical.


1. If the vaulter has excessive penetration with a big bend, he should move to a stiffer pole.

2. If the vaulter has excessive penetration with a small bend, he should hold higher.

3. If the vaulter has poor penetration with a big bend, he should lower the grip.

4. If the vaulter has poor penetration with a small bend, he should move to a softer pole (but never less than the vaulter's weight).

The pole must be planted while the vaulter is high on the toes. The timing of the pole plant (the instant the pole strikes the back of the box) is crucial. The sequence is: the takeoff foot touches down, the pole hits the back of the box, and the takeoff foot leaves the ground. The better the vaulter, the closer the pole strike and foot release. If the pole plant occurs during the first half of the support phase (closer to the instant of touchdown), the vaulter cannot push the pole upward and forward and therefore will be jerked off the ground by the pole.

The vaulter must jump forward and upward at takeoff. Velocity must be converted from horizontal to vertical. The only way this can occur is to jump. The takeoff must be active rather than passive. Good vaulters have a takeoff angle of between 14 and 20 degrees. Takeoff angles, which are too low, often times, lead to pole breakage.

A misunderstood concept is: Start the pole bending by pushing with the lower hand. The weight is on the top hand, but if the vaulter is solid with the lower arm, there is a great reduction of the compressive force necessary to bend the pole. An effective plant must be followed by a follow through. This is a short phase during the vault where the hips and chest move in a linear direction rather than creating early rotation around the shoulders. As the hips and chest are moving linearly, the arms and takeoff leg drag back behind the body. This prevents an early swing up.

The true line concept (top hand to butt end of the pole). The center of mass must be kept as far back from the pole as possible during takeoff, penetration and inversion phase. Hanging and swinging from the top hand, maintain pole speed and bend. The lower the weight on the pole pendulum, the faster the pole travels. The vaulter must keep his center of mass behind the pole during the swing. The rotation of the vaulter about the pole must occur about the shoulders and not the hips.

Invert through release is the phrase used where the vaulter's body extends in a vertical direction as he turns, pulls and pushes off the pole. The swing must take place through the hands and not the hips. Because the top hand cannot move, the left arm controls the pole speed. Thus, by closing off the angle between the left arm and the pole, the body is allowed to move in close to the pole so an active pull and push can occur. 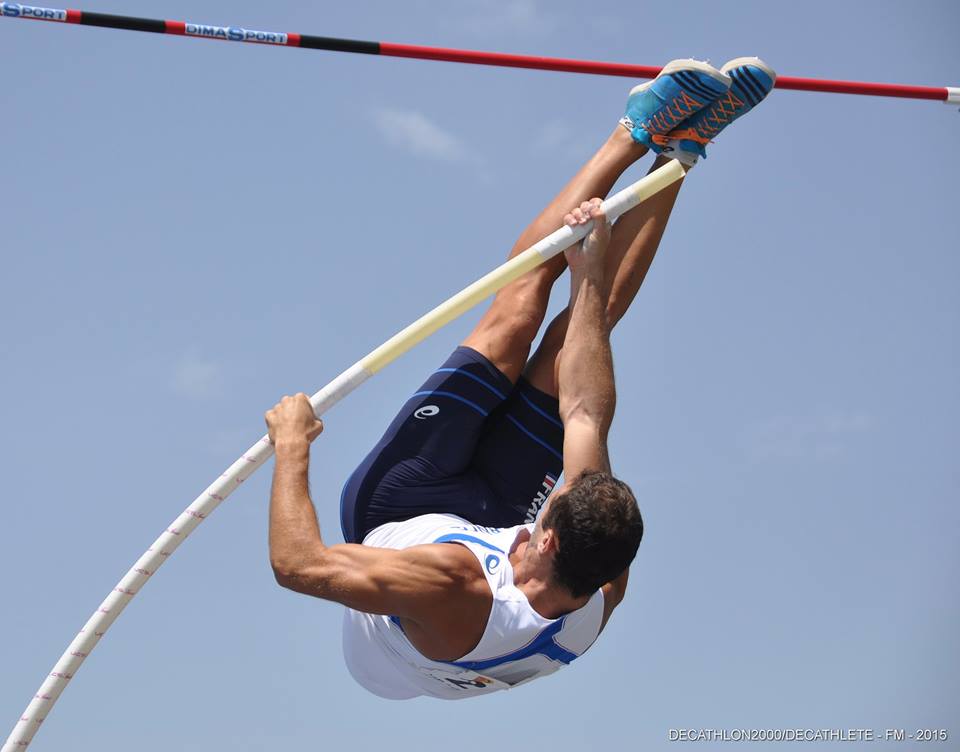