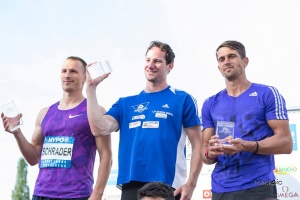 Damian Warner ran this morning 13.54 in the 110 H to break the meeting record from Frank Busemann. Last one (or number 24) in the man’s  field is Deuber. Warner become’s number 23. Kai Kazmirek (5317) still  leads after the hurdles, 10 points ahead of Rico Freimuth and 14 ahead of Jeremy Taiwo. Schrader 5245, Sintnicolaas 5191. There was a rare moment with Eelco Sintnicolaas, because he was by accident hindered in his hurdle race and was given the opportunity to start again … alone! With thousands of decathlon fans shouting for him alone he went to a time of 14.34.

Javelin. The B group has already thrown the spear because of the late 5.30 pole vault. The 800 m begins for the heptathletes. Schippers is second but unfortunately feels a pain in the knee and doesn’t want to take a risk. She won’t run the 800. Theisen-Eaton knows exactly how fast she must run to be part of the select group of 6800+ heptathletes . With a time of 2:09.37 and a total of 6808 points she becomes the world leader and Canadian record breaker. Group A javelin Men starts and Kazmirek takes again the lead after a 64.45 throw. Nobody has an idea of what Willem Coertzen is doing! An African record is in the making! He throws a fantastic 68.43 (event-winner) and will produce a 8398 decathlon after running 4m22.22 in the 1500. The (young) man is thirty-two years old doing a personal best total

Still participating athletes:21, Warner rank 14. Kai, Rico and Michael three Germans respectively 1,2 and 3, followed by Willem Coertzen as 4th just before the 1500. At the end of the decathlon Willem and Rico change places. Personal Decathlon  records for Coertzen, Taiwo (who wins the 1500 in 4:19.64 in a windy and warm arena), Braun, Auzeil, Wiesiolek and Deuber. Warner (rank 14) indeed breaks the above mentioned record from Dan O’Brien 7856 (remember the Dan or Dave campaign in 1992) with one failed event. 7893 is the new challenge if …

More than  twelve thousand came this weekend to the Mösle-stadion. As the speaker said that is a record and I was one of them.