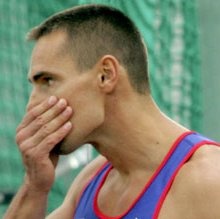 The world record holder in decathlon, Roman Šebrle, who is currently at a training camp in Potchefstroom, Republic of South Africa, got hit in the shoulder with a javelin thrown by a local female athlete.

The Czech news agency CTK reported that fortunately the wound was not deep and Šebrle can continue his training sessions very soon. The press was informed of the unfortunate incident by Šebrle’s spokesperson David Travnicek.

The press release stated that the wound was a couple of centimetres long and looked serious at first, but a close examination showed that the javelin had stopped between the skin and the muscles without causing any serious injury.

A thorough medical examination revealed that Šebrle can continue his trainings in the Republic of South Africa any day now.

ChrisB wrote on Feb 05, 2007
Someone knows if it is his right or his left schoulder?
Because it has an effect for the throwing - arm.
Allthough its bad for weighttraining and anyway for the PV.
Notify us, if you think this comment is inappropriate
IP: 85.10.7...