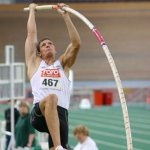 The leaders of last year’s world seasonal ranking, Aleksandr Pogorelov and Aleksei Drozdov from Russia are going to compete at the tenth Reval Hotels Cup in a month’s time.

The organiser of the event, Erki Nool, wants to celebrate the tenth meeting with a world-class competition on February 3 and 4 and has therefore been contacting other top heptathletes and asked them to participate. However, he will not say yet, who are the other strong competitors from abroad, besides Pogorelov and Drozdov.

This year, Reval Hotels Cup introduces a team competition, where the scores of the best two competitors of each nation are totalled to calculate the team score. French multi-athletes have also promised to come to Tallinn for the first time. Unfortunately, the reigning World Indoor Champion Andre Niklaus has decided to miss the entire indoor season.

Estonian athletes Mikk Pahapill, Indrek Turi and Madis Kallas have accepted Nool’s invitation. The 27-year-old Kristjan Rahnu, who has been suffering from an old leg injury, has not yet said whether he will be competing at Reval Hotels Cup or not. Because of the same injury, Rahnu did not finish with the score he had hoped for at the European Championships last summer.