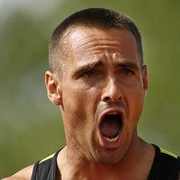 Roman Šebrle, the world record holder in decathlon, scored 8697 points in a meeting held in Kladno, Czech Republic. As of now, this is the world’s best performance of this season in decathlon and it was also Šebrle’s best decathlon score since becoming the Olympic Champion in 2004.

The 4551 first day score gave hope for the total of over 8800. Though his second day 110 m hurdles and pole vault results were not so good, he still managed to put together a score which tops the world list this year. Andrei Krauchanka of Belarus, who had been leading with 8617 so far, was moved to the second position.

Dmitrij Karpov of Kazakhstan was the second in the competition with a score of 8553 points, which actually is Karpov’s second best score in his whole career. It also moved him into third on the world list of this season.

Romain Barras of France finished third with 8298 and Tomas Dvorak was the fourth with 8020. Dvorak’s 8020 was his 35th decathlon over 8000 points. In this list, as in many others, the first position is held by Roman Šebrle, who has finished 38 decathlons scoring over 8000.