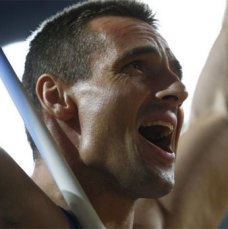 OSAKA, Japan - Roman Šebrle, the Olympic champion and world record holder, added another title to his resume Saturday when he won the decathlon at the track and field world championships.

The 32-year-old Czech moved into No. 1 position with a personal best 71.18 meters in the javelin, earning him a 44-point lead over Jamaica's Maurice Smith with only the 1500 meters remaining. Šebrle stayed within 10 meters of Smith in the 1500 to ensure victory, finishing with 8676 points. Smith, who led from the third event until the ninth, took silver with 8644 points and Dmitri Kaprov of Kazakhstan got bronze with 8586.

Two American hopes failed to finish: defending champion Bryan Clay withdrew after injuring his right leg in the high jump and 2003 winner Tom Pappas pulled out with a foot injury after the hurdles.