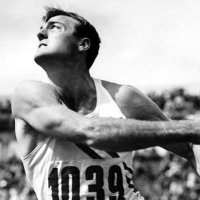 The two-time Olympic Decathlon champion Robert Mathias, after a long term fight with cancer, passed away on Saturday (2) at his home in Fresno, California, USA. He was 75.

Born on 17 November 1930, in Tulare, California, United States, Bob Mathias, who had been afflicted with anemia as a boy, was only 17 years old when his high school track coach suggested that he take up the Decathlon.

Less than three months later, he qualified for the U.S. Olympic team. He was so inexperienced that when he competed at the 1948 London Olympics, he fouled in the Shot Put because he did not know that it was forbidden to leave the throwing circle from the front.

Asked how he intended to celebrate his Olympic victory, Mathias replied, "I'll start shaving, I guess."

At just 17 years 263 days he was the youngest ever male Olympic Athletics champion.

When he returned from London to his hometown, the plane had to circle the airport until the runway was cleared of the crowds who had come to welcome him back. Mathias won the Sullivan Award as the nation's outstanding amateur athlete for his feat. He also received more than two hundred marriage proposals!

Four years later, at the 1952 Helsinki Olympic Games, with a World record, one of three (two ratified) such marks in his career, he became the first repeat winner of the Olympic Decathlon title. His margin of victory, more than 900 points, is the largest in Olympic Decathlon history.

The Mathias legend was enough that just two years after his second Olympic gold, which was his last ever Decathlon, a film of his exploits, a biographical account, hit the screens, entitled simply ‘The Bob Mathias Story (1954)’, directed by Francis D. Lyon.

Never defeated in the Decathlon, Mathias was a four-time national champion in the 10 events. Also a star football fullback at Stanford University, he played in the 1952 Rose Bowl, making him the only person to ever compete in an Olympics and a Rose Bowl the same year.

After his competitive days, he was a member of the U.S. Congress. A Republican, he served in the U.S. House of Representatives from 1967 to 1974. He also directed the U.S. Olympic Training Center in Colorado Springs. He was elected to U.S. Olympic Hall of Fame in 1983. Nine year’s later Mathias was one of the honoured guests invited by the IAAF to mark its 80th Anniversary celebrations in Stockholm, Sweden, the city in which it was founded.

The family has set up a public viewing for anyone who wants to bid farewell to Mathias. It will be Tuesday from 5:30pm until 8pm. at Hamilton, Peers, Lorentzen Funeral Home in Tulare. The funeral will be held on Wednesday.