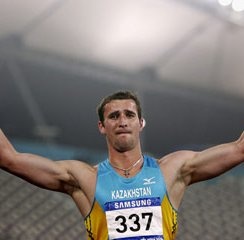 The 25 year-old totalled 8384 points to win gold by a 615-point margin over Vitali Smirnov of Uzbekistan with Kim Kun-Woo of Korea taking the bronze.

The Kazakh led by 449 points after day one's five disciplines and won the first three disciplines on day two.

In the afternoon session, Karpov’s fourth place in the javelin throw and sixth place in the 1500m were his worst two finishes, but by that stage his lead was large enough that he did not need to push himself.

Smirnov was in second place after the first day and retained that position to the end. He had accrued enough points going into the last event to hold off Kim, who was sitting in third and known for his speed over the 1500m.

Kim won the final event by more than 30 seconds, but it was not enough.