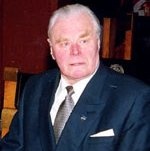 The Estonian athlete Heino Lipp, born on June 21, 1922 in Kiviõli, Estonia, died yesterday, August 28, at the break of dawn.

Heino Lipp was a former world class athlete, a multi-time Soviet Union champion in decathlon as well as in several other events.

He set his first USSR record on June 3, 1946 in Tartu, where his result in shot put was 15.62 m. If Lipp had competed at the Olympic Games, he would have been the favourite at London Olympics in 1948. At Helsinki Olympics in 1952, Lipp could have won silver if not gold.

Heino Lipp carried the Estonian flag at the opening ceremony of Barcelona Summer Olympics in 1992.