Romain Barras takes a look in the rear mirror (4) 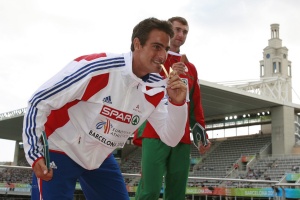 Adapted from an article in l’Equipe. With the authorization of Romain Barras.

Three days  before the World Championships, Romain Barras takes a look in the rear mirror. The French European Champion evokes memories of a few major competitions: the dream of his first Olympics, the importance of Berlin, the consecration of Barcelona.

“I did not qualify for the World Championships in Paris in 2003. Instead, I won the world university  championships... in Daegu. I scored 8196 points. It would have given me the sixth or seventh place in Paris ... But with "if"...! My first true major championship, it is the Athens Olympics in 2004. 13th, 8067 points. It is the realization of a childhood dream. If I had been told that four years before, I would not have believed it. Learning my selection, going on a training course in Marcoussis ... The opening ceremony, crossing the great champions at  meals or on the stadiums ... When you love  athletics, sports in general, it's magic!

Even if I had come to the perfs, once on the stadium, my eyes were wide open. I was a spectator. Being less so, I could have done better. But it's still a great memory. I have known everything in athletics, from the disappointment of the regional championships where you finish ninth in the first young years, to the Olympics when you’re on TV. I have no regrets. 13th at the Games, it is not so bad. I experienced something huge. In 2005, I made ​​my first world championships. I finished seventh with 8287 points in very difficult conditions. A big storm broke out at the end of the first day, the 400m was delayed for two hours, we were confined in the stands, the races were postponed ... A disaster. But I am a finalist and that was my second dream.”

Beijing: One of the best competitions in my life

”The year of the Beijing Games, I had many physical problems. But I arrived in China with a hellish rage and I finished fifth, with a total not great (8253 points). That decathlon was a massacre. There were many hurts, drop outs ... I was seventh before the 1500 m. It remains one of the best competitions in my life. Before me, in the French decathlon , there was Ignace Heinrich, second in the London Olympics in 1948 and Christian Plaziat, fifth in Seoul (1988). It's a great memory. Humanly, it was great.”

”In the 2009 World Championships in Berlin, I had quite a lot of physical problems again, particularly in the hamstrings. I was out of it. The only memories I have are based on pictures I saw again not long ago! I have no feelings, I decided to delete it. It was one of the most challenging decathlon in history, and to see everyone improving, having  fun, and me helpless ... I told myself never again. I never want to experience something that transcends the others and not me.”

”And then there was Barcelona ... a great competition. Especially in sharing with other decathletes, including Florian Geffrouais. It was great. 2010 was a year when I had practically no injuries, it helped me feel confident, I was able to give everything. I had had two decathlons high-flying before. In Barcelona, ​​I did the best European total of the year (8453 points) and I won.”

Daegu: back to the future

”These memories come back from time to time, especially preparations or championships where it worked well. It helps to find references, we remember what we did at that time ... Compared to Daegu, I wonder. This is where I won in 2003. Is it going to be like that? The same village, the same stadium ? It had been a great success ... How am I going to relive that? Today, I am totally different from 2003 or even last year. In addition I got injured, so it's difficult to draw conclusions. I know there's London in a year, so I’m not going to take risks and hurt myself, and take four months to recover. I also know that I will not be a spectator. I have learned over the years. I’m going to focus on me. "