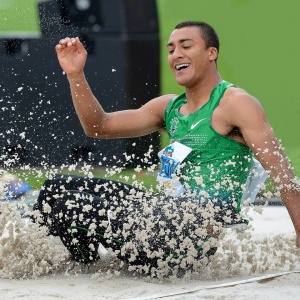 There he is again, the man who makes it look all so easy to join in  a combined event. Ashton Eaton as a young guy, freshly 22 years old broke first the heptathlon record in 2010 from another living legend. Dan O’Brien (6476 indeed the previous world record holder) was following that heptathlon at home. Before the start of the 1000 he called Harry Mara, Ashtons trainer, to ask Harry if his pupil would break his world record. “We all love you very much Obi” (O’Brien) he said “but at this moment we love the world record even more”! Ashton ran an astonishing 2:32.67 personal best and broke the record with a score of 6499 points. A new type of combined events athlete was born because sprinting (under 10.4 for a 100 meters or under 6.7 for a 60 meters) ánd running a 1000 or a 1500 at this level (world record level) is unseen before.

Two years later on a rainy day and bad meteorological circumstances, Super-Eaton started a decathlon not knowing that he was going to perform, as well and as shining as he did those two days. He broke the magical record from that other superman Sebrle with 13 points. For some people not a nice number but easy to remember after having that 9026 for eleven years in your head as 13 points added makes 9039 and easy for the women pentathlon world record from Natalya Dobrynska (5013).

Anyway, the only thing displeasuring many fans is the effect on the world record holder that he made it so soon in his life and lost some appetite for the decathlon, especially also by lacking opposition at his level.  But ! his here again  this weekend and the decathlon record certainly didn’t displeasure him nor is the fact that he’s not participating this year, displeasuring the other decathletes - giving them an opportunity to medals and a podium. Yes, it’s a pity but, we don’t have to train for it (blood sweat and tears!) and we have to respect someone’s liberty, someone’s freedom to make his/your own decisions. Ashton himself – when asked how he felt about a fellow decathlete said “I like him for the person he is.” He didn’t say I like his athletic capability’s. We can do the same towards him! (Hey do I get payed from Harry Mara in Götzis this year for saying this? Just a joke folks.)

About a high jump and a world record!

Dreaming of a record

The 60 meters will be a battle between Warner and Eaton. Long Jump, van der Plaetsen winner? Shot Put most be won by Pascal Behrenbruch. High Jump Krauchanka (219) or van der Plaetsen (217) or one of the hungry lions like Kazmirek (213). The 60 m hurdles Eaton (7.60) or Warner (7.69 this year)? A good pole vault competition as well is possible within the heptathlon. Pb’s:

At the end no one  from this field can run like Eaton. Look also at the profiles of this athletes on Decathlon 2000 and read the pdf files from the previous article on Sopot 2014!