Eelco Sintnicolaas needs to focus on speed and power (0) 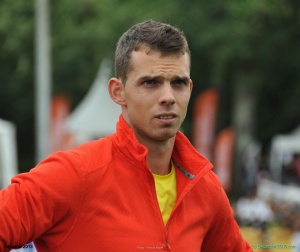 In Netherlands it’s quite normal when you start track and field when you’re young, you just do 2, or maybe 3 training sessions a week at your club with a group of your own age. You start to learn all the events a little bit.

When I was 16, I chose for combined events specialism. I started to train in a smaller group together with other combined event athletes, about 4-5 times a week.

After high school, when I was at the age of 19, I decided to ask Vince de Lange (still my coach) to train more. Because when I went to world junior championships I discovered there was so much space for improvement. All the other guys were much bigger and stronger. I liked the atmosphere of decathlon and wanted to try to make the Dutch team to other championships!

In 2009, when I was 22, I scored my first 6000+ heptathlon and 8000+ decathlon, won in Tallinn the Reval Hotels Cup indoor and the European Championships <23 outdoor. Ever since I am a regular member of the Dutch team in international competitions.

The only championship I missed so far is the World Championships indoor. This year in Sopot I am one of the participants!

After a great winter I had some problems in the last weeks. In the end of January I went to the hospital for a small surgery on an abscess on my buttock. It was pushing to a nerve and radiated to my left leg, it was really painful and I felt sick. So because I had complete narcosis at surgery, one week of antibiotics and because the wound had to stay open, I couldn’t train for a week. I did my first jog, 14 days before Nationals where I had to qualify for Worlds… one week later I tested my self in a competition in Gent, Belgium. 60m, long jump and shot put. Great to be at the track again, but results weren’t great. Missed a lot of speed and reactivity… one more week to go to Nationals…

I had good hope to make a lot of progression in one week, so I would be good enough to fight for 6100 points.

It even went better than I could possibly imagine. At my home track in Apeldoorn I scored 6242 points (WL) and only lost “some” points in 60m, 60mh and 1000m compared to Gothenburg last year where I became European indoor champion with 6372 points.

I need the next 3 weeks to focus on speed and power, but this score gave me so much confidence. I am really looking forward to compete in the beginning of March.