Romain Martin: On the Way to Rio Olympics (0) 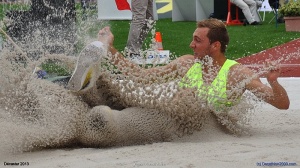 Before focussing myself on  the combined events , I started sport when I was very young, touching a bit of everything and especially basketball during my early years until I was a juinor. Thus, naturally, I developed physical skills for spring and thus high jump.

My brother, a triathlete has asked me to try athletics, just to see what it was like, as I beaan to be fed up with  basketball and eventually it turned out that I was doing quite well and cleared 1.95m as a junior.

Then I attend league training sessions and I start to touch a little bit of everything . I make my first deca and reach 5410 points. A few years later I put it a little more seriously and I realized 7294 points.

Finally the following year I left for the United States for 3 years and discovered the high level for the first time. I improve a lot and and totalize 7867 points, and in the winter I progress from 5446 point to 5897 points. Two years later (2013) my record reaches for the first time more than 8,000 points (8,013) and then I become aware that there is a way to see further, according to the room for improvement I have in some events.

Today I can say that I "live" decathlon. In fact, I 'm training with a view to achieve the Rio Olympics in 2016 and so you have to love to train hard and spend time on fields. What I love most in decathlon is that nothing is ever acquired and that we can always recover from a failed event.

In terms of training, I train Monday to Saturday from 15 to 20 hours per week . This year, I focused primarily on speed, discus and pole vault. Apart from that, I love training and "hurting myself" on lactic sessions type 300-350 x 3, and I love spending time trying to understand the mechanics of the perfect gesture...

For this season, I would first like to make a complete season without physical problems. This winter, I intend to aim at the title at indoor Elite French championships as French leader doesn't participate. This summer I hope to achieve a good result for my first entry at the meeting of Gotzis. Then the European Championships in Zurich is the major goal of my season and it will go through a personal best to get there.