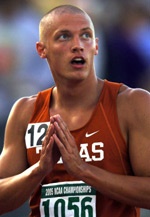 Trey Hardee, who set an American collegiate Decathlon record of 8465 at the Texas Relays two years ago and then spent all of 2007 injured, returned to the scene with a performance that in many ways was even more remarkable.

With only six weeks of serious training behind him, the 1.96m, 95kg Hardee racked up 8371 points, an early season world leader, and put himself back into the U.S Olympic picture.

Behind him were Chilean Gonzalo Barroilhet, with a national record of 7828, Americans Brandon Hoskins (7800) and Rickey Moody (7787) and Camille Vandendriessche of France with 7559 points.