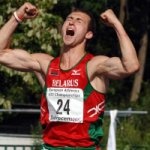 The winner was decided upon after comparing their scores of single events – Krauchanka got more points than Karpov in four, whereas Karpov did better than Krauchanka in three events. Karpov could not beat the Belarusian in 1000 metres by finishing with 2.43,69, but Krauchanka ran 2.41,84 and was announced the winner of the whole competition. Arkadi Vasilyev from Russia was the third with a new personal best of 5978 points.

After showing the second best time of 2.41,27 at 1000 metres, Germany’s Andre Niklaus managed to claim the fourth place (5963), whereas Czech Roman Sebrle remained fifth with 5892 points.

Eduard Mikhan from Belarus and Aleksei Drozdov from Russia finished with a tie score of 5829, but after comparing their scores of single events, Mikhan was the sixth and Drozdov the seventh.