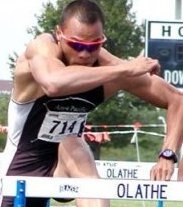 If Honolulu's Bryan Clay had all his personal-best marks in the same meet, he would break the world decathlon scoring record.

The history of decathlons — the world's oldest measured test of strength, speed and technique for running, jumping and throwing — suggests that doing your career best in all 10 events in a single two-day meet is not likely.

But by any projection, Clay, at age 24, is a legitimate world championship contender.

As the 1998 Castle High School graduate prepares for the United States team trials July 16-17 in Sacramento, Calif., and the Olympic Games decathlon Aug. 23-24 in Athens, Greece, Clay has been reflecting on how he got here. How did he get to be Bryan Clay.

Ironically, it was a troubled childhood after his parents' divorce that led him to the sport, Clay says. "I was an angry, angry boy and I did not know how to express it, so I got into fights.

"I started fights in basketball and soccer. I bit a kid in first grade and sent another kid to the hospital."

Finally, Clay says, his mother told him: "You can't figure out how to play with other kids so no more team sports. You can do swimming or track.

"They don't involve other kids so you won't get in fights and you can't blame anybody else for things. You don't have to interact with anybody."

The family moved from Palolo to Kaneohe when Bryan was in the sixth grade and he joined Kailua Track Club and became an HHSAA state champion at Castle High, where he was coached by a former decathlete, Martin Hee.

He picked Azusa Pacific University in California for college — not because a series of decathlon champions had been developed there, but because it just felt right, Clay says. Azusa Pacific is "kind of like Hawaii," Clay says, "a small place where everybody knows everybody and people genuinely care about who you are as a person.

"There is a sense of ohana, just like back home."

"It shows how much God's hand has been in my in life," Clay says.

"If I had gone to any other school, I would not be where I am today.

"I would have moved back home, got some girl pregnant, worked at 7-Eleven and surfed in the afternoons."

At Azusa, "I found men who I wasn't having power struggle with, who really cared about me," Clay says. "They were models of what a Christian young man was supposed to be like. He got guidance from dean of students Terry Franzen and track coach Kevin Reid, met and married Sarah Smith of Seattle and graduated last year with a degree in social work.

"I started to learn what commitment and love really meant," Clay says. "It changed every aspect of my life.

Now Bryan Clay is poised in the wings to make his debut on the world media stage when the Olympic Games return to their birthplace in Athens in eight weeks.

Decathlon experts predict Bryan Clay will make a strong run for a medal this year and will be a leading contender for gold in 2008.

Clay says his goals extend much further. "There is more to life than just track and field," he says. "I want to work with troubled teens, who are at where I was at.

"I want to be the one who makes a difference in their lives."