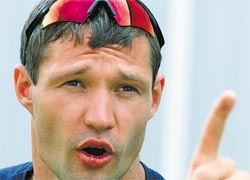 Olympic champion Erki Nool has found a new self-belief in his abilities after finishing fourth in the cathlon in Götzis at the weekend.

The Estonian has struggled to find his form in recent years partly through illness. However, Nool's confidence was given a major boost when he scored 8317 points in the Hypomeeting to finish behind Roman Šebrle (8842 points), Tom Pappas (8732 points) and Dmitri Karpov (8512 points).

And Nool believes if he can give a similar performance in Athens, then he can challenge for a medal. He said: "When I travelled to Götzis I was thinking that I'll just do my best and won't get worked up if something goes wrong. There were couple of disciplines where I could have done better."

Nool told Estonian daily Postimees: "I gave away too many points too easily. If I do that in the Athens Olympics, I will not get a medal."

However, Nool admits there is still a big gap between his results and those of close rivals Šebrle and Pappas.

"I am an optimist and think constantly about how to bring a medal home from Athens. It's not impossible."