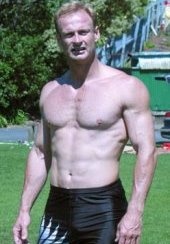 The full results can be found at here.

His first approach to the Masters World Record Simon did last year at the national Championships in Reutte/Austria. He started there with very good 11,44 in the 100 Meters but injured in the long jump and later had to quit. His first international success he had in 1987 - there he placed 6th at the World Championships, and with his season best of 8366 points he was ranked 4th in the World list. His last competition before his comeback he did in 1998 at the Commonwealth Games in Kuala Lumpur, where he placed 11th with 7425 points. After this event Simon got into serious troubles, and it took him a long time, to find back to Athletics.