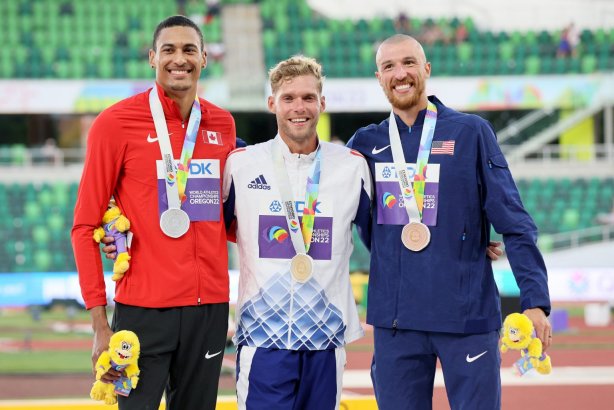 A chilly start to the decathlon – it was just 16 degrees in Hayward Field – put paid to any expectations of fast times. The exception to that was the young king of the North, Sander Skotheim of Norway, who embraced the chill to run a PB of 10.88s in the first heat. Dan Golubovic of Australia also made it under 11 seconds, and the defending champion Niklas Kaul of Germany was not too far off his lifetime best with a run of 11.22s, just behind the 2019 silver medallist Maicel Uibo of Estonia in 11.14s.

Andy Preciado of Ecuador pulled up after a few metres, jogged back to the start and didn’t take any further part in the competition. Ondřej Kopecký had also scratched from the competition, a shame for Roman Šebrle’s charge who has improved so much this season.

Heat two didn’t deliver any surprises, but Johannes Erm’s run of 10.94s did suggest he might be in good form and able to improve on his scores of 8132 and 8250 this season.

And then the speedsters in the final heat. The fastest man in decathlon history, Damian Warner of Canada, led a procession of the quickest men in the field – Warner 10.27s, Pierce Lepage of Canada 10.39s, Ashley Moloney of Australia 10.49s and Ayden Owens of Puerto Rico 10.52s. All as expected, and all down a little on their best given the cold. Just behind them, Zach Ziemek of USA ran 10.57s – just two hundredths off his best in chilly conditions.

The world record holder Kevin Mayer ran 10.62s behind Ziemek, a similar margin down on his best to Warner. So far, so steady from the big two.