Decathlon 2000 › News › Carlos Chinin: I decided to start training as a joke
9 votes

Carlos Chinin: I decided to start training as a joke (0) 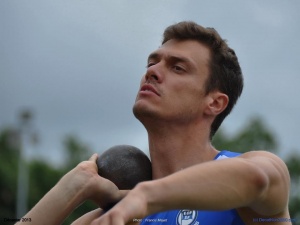 Well, before practising athletics, I have played football and basketball. I was always very active in training , and that was when a teacher invited me to attend an event for school athletics.

I accepted the new challenge and among dozens of athletes trained, I won 5 medals.
It was in 2002 when I decided to start training as a joke. Since then I have had some cool results.

But for training within a group of jumpers, I always had problems with throws, as in the pole vault.
Training for triple and long jump, overloaded my body and whenever I had to train for throws, I always hurt me and could not complete a decathlon for a long time.

It was in 2012 with the lack of specific training, I suffered a serious accident during Götzis . During the pole vault , I overtook the bar but the jump was too much to the right , and I fell with my face on the floor , broke my nose, my arm , and smashed the periosteum inside the irons support of the mattress behind the Standings . Until a helicopter came to get me on track. In Brazil everyone thought I was dead . There would be the end of my career.

So returning to Brazil in 2012 I had the opportunity to train with Oleg Ruev a Ukrainian coach invited by the Brazilian Athletics Confederation to help develop the decathlon and heptathlon in Brazil.
I was determined to use this opportunity and grabbed it tightly , and since then training as a decathlete must train.

I improved my throws and my pole vault . I managed to break the South American record and was sixth in the World in Moscow , and in the world ranking . And the work does not stop there . We are training for outdoor events to come.

On the atmosphere between decathletes , I believe it is always friendly , everyone knows everyone and spend hours together during the competition , even when they end their careers as athletes , friendships incredibly remains. That is Awesome.

Each Meeting or competition has a taste and history in particular.
I have a great affection for Kladno and Ratingen for scoring my first 8000 + in these competitions.
Gotzis taught to fight even in extreme climatic conditions. And this is very important for every decathlete .
Italy reminds me of the origins of my family " CINI " ( Chinin ) . And 2006 was my first trip to Europe.
And Talence have so good vibrations that I want to come back there for sure.

The Heptathlon is quite fun , I participated in the international meeting of Estonia - Tallinn . And I met personally Erki Nool , it was really cool ! Well, the Heptathlon exceeded my expectations , and I intend to participate in more events next year .

I will be present in the outdoor season in European meetings . And if all goes well , I intend to improve my results in these meetings .

Thank you for the affection of all.
And very soon I will send news .
Keep in touch