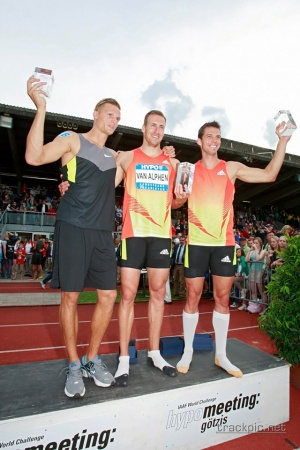 Götzis 2012 - In may, decathlon-Götzis is a place where you can find celebrities from earlier days like Tomas Dvorak, Uwe Freimuth, Guido Kratschmer, Erki Nool, Torsten Voss, Sebastien Levicq etc. as well as writers on the subject like Frank Zarnowski, Kees Sluys, Bert Vreeswijk and Hans van Kuijen. Again, the meeting in Götzis was a feast of international friendship and a place and time for surprises. Everyone has seen the results by now, so here is a story about the winner.

Before this weekend Hans van Alphen was 169th on the all time list for decathlon. With 8200 points he won last year in Talence, qualified himself for the Olympics and went home with a Belgian record. We asked him on Friday before the meet what his expectations where. “I didn’t come to peak here” he said, “I’m already qualified for London, but I feel really good and relaxed, so maybe I can do a little Belgian record – who knows”! Hans is a modest guy and we had no idea of the shape he was in. I saw something like 8250 points before my eyes when he said that and  told him that an American site on internet called him a medal contender for London! “No way” he said and laughed at it “you really have to show me this”. With his close-cropped hair at the time he and Trey Hardee have been compared with the American “prison break” actor Wentworth Miller. I remind him of this. “Makes me think of  a story that overcame me” he said “One day I was in a hotel, and people said look there’s Trey Hardee! Some youngsters came very excited to me, Trey … Trey, please can we have a signature”. “What did you do” I asked. “I said, I can give you an signature but I’m not Trey Hardee and they accepted it anyway.” So now that we are here in what event do you hope to do a pr? Hans smiled “I hope in the high jump.” This chat was on Friday!

I see him back on Sunday evening after his “little Belgian record”.  A leap of 300 points forward is unusual but not so unusual . We remember guys like Erki Nool and Andrei Krauchanka that jumped almost 500 or 600 points ahead, but I want to ask it anyway. He can get away of the rest of the press (he speaks Dutch, German, English and French).

Hans how do you explain 300 points improvement?

It’s all coming together now. In fact this is something that should have happened long before. An athlete knows sometime from training that much better things are possible. Last year for example the Belgian record came to me in a strange way because I had no outliers, except for the pole vault I did no personal bests. You know I have been waiting for this moment for three years long. As I said everything is coming together, good weather, good wind, a good competition, a real good preparation without injuries. Nevertheless I’m impressed that it went so well. I expected something like 8300 or 8350 points, so this is a dream come true.

You had your share of bad luck in the past!

Indeed, maybe the reverse question would be better, why didn’t I do better last year. I was capable but as you know decathlon is unpredictable. For about two or three years I had no significant injuries,  so I’m very pleased with my result.

You studied respiratory physical therapy. Does it make you look at your body in a different way to recognize your limits for example?

It probably does. It is certainly  true that things are crossing your mind, but I’m obliged to carry on with my instinct and experience. For example I know that I don’t have to panic when things are going bad on a day. In the last two weeks I ran 11.43 for the 100m and 15.19 for the hurdles. I learned not to panic. It was cold (8°) and I had opposing wind. Now I’m here and circumstances are ideal.

We are a very good team right now. Cedric is certainly going to do 8000 and more in the future. Thomas unfortunately has a hamstring problem and couldn’t come to Götzis. Thomas go’s to Helsinki. Cedric has the same problem as I had at the time. I was 23 when I started training like I should. Next year I went over 7400 and in 2006 I did 7900. Cedric is still studying and he should train double as much as he is now doing!

Believe it or not, we didn’t came here with the idée to win. The purpose was to perform without pressure. I knew Hans was doing well in the high jump, but 2.06 was a surprise. On the other hand my athletes often perform much better in a competition. It was in Hans his advantage not to feel pressure like the German athletes felt. Two of them are selected now for the Olympics. Hans was qualified already. They felt much more stress.

Here are some details.

Javelin Throw: 64.15 (59.62/x/64.15) 800 points. Two weeks ago Hans threw a 67.59 pr. After the javelin the Dutch and the Belgian fans wondered what would happen. Will Eelco win or Hans? Did Hans had a strategy? Would he run a tactical race, running behind Eelco Sintnicolaas and then make a move in the last 300 meters? The points difference was 28 or about 4 or 5 seconds that Hans should run in front of Eelco. Hans decided to run almost from the beginning to run his own race, making it an undisputable honest effort between friends and he ran his second best ever time for the 1500.

Although the fact that Leonel Suarez was favorit and a great crowd came to support the Germans, Hans van Alphen won and has now a personal best total of 8818 points, showing the best shape of his life. With 8519 points he  is number 20 in the all time list of Götzis and 48 on the world all time list. Since the year 2008 only 8 decathletes had a better result (since 2002, 12 athletes had a better result). Eelco Sintnicolaas was second and holds now the national record for both multi events – the decathlon and the heptathlon (8506p/6175p). Pascal Behrenbruch (8433) was third and gave us his second best decathlon score of his life.  Will they be medal contenders for this summer? Nobody knows, look out for Ashton Eaton and Trey Hardee!

Greetings to you all.