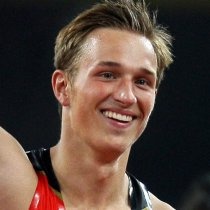 Michael Schrader of Germany won the decathlon at the Götzis Hypo Meeting on Sunday after scoring a year-high 8522 points to edge Trey Hardee of the United States by six points, the smallest winning margin in the event's 35-year history.

"This takes my breath away, it's unbelievable," Schrader said. "I was just hoping to get in the top five. Winning in Goetzis was a huge goal in my career. Now I've reached it."

Pascal Behrenbruch of Germany was third with 8374 points, ahead of world record-holder Roman Sebrle of the Czech Republic, who had 8348. Olexiy Kasyanov of Ukraine, who led after the opening day, finished fifth with 8286.